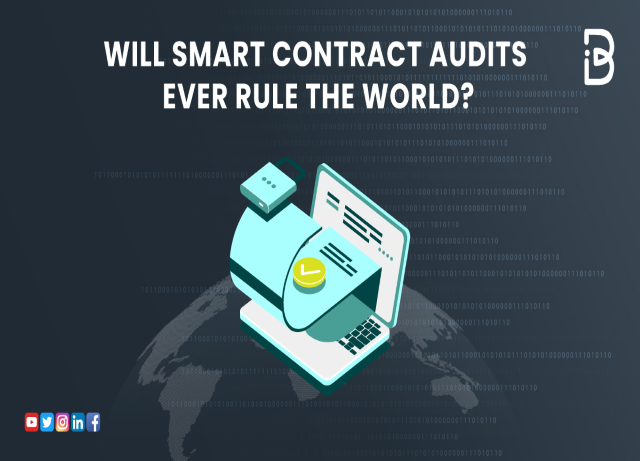 Vitalik Buterin, the co-founder of the Ethereum network, defines a smart contract as a mechanism involving digital assets and two or more parties. It automatically redistributes these assets among those parties pre-determined by a formula unknown at the time of smart contract initiation.

Post Ethereum, with the exponential increase in the use cases of smart contacts, especially in the DeFi ecosystem, maintaining its security has become challenging. Deploying code without first performing smart contract audits could jeopardize your blockchain projects.

This blog will discuss smart contract audits and if they are the future of the blockchain world.

What is a smart contract audit?

Auditing a smart contract is equivalent to giving a second opinion on your code’s functionality. It aims to detect vulnerabilities in the smart contract code and optimize it for gas consumption.

Typically, delegated to a third-party audit covers the following:

Additional Resource: What is a Smart Contract Security Audit

Why is a smart contract audit required?

Smart contract vulnerabilities have repeatedly resulted in the largest hacks in the history of blockchain and decentralized finance.

What are the use cases of smart contracts?

Since smart contracts are all set to create a presence in almost every sphere of life, a smart contract audit is probably the next big thing required for secure blockchain deployment. Following are the use cases of smart contracts.

Whether it’s banking, insurance, or investment, blockchain-based decentralized finance is the next iteration of the current financial ecosystem. DeFi uses a complex system of smart contracts to remove intermediaries, providing a trustless transaction methodology.

Smart contracts are one of the most secure ways of storing data. Medical records usually encompass sensitive data, and with blockchain, data can be easily stored and is immutable due to blockchain’s inherent nature.

Supply chains can be digitized by deploying smart contracts for inventory management and safe transactions. This can aid in increasing their overall effectiveness and usability.

This doesn’t need any introduction, as blockchain is the most popular in the gaming industry. Many new gaming DApps are coming up in the market offering uses of NFTs, play-to-earn games etc.

Smart contracts create the possibility of a viable solution to improve security and information management, as well as identify new opportunities. All this seems enticing, but it comes with its own challenges, namely security concerns.

Fearing smart contract exploits has taught us that no mistake is more grave than deploying unaudited code on the blockchain.

Following are the benefits of a smart contract audit.

Although the audit process can be automated, manual, or a combination of the two, a smart contract auditor brings an expert perspective to your code.

A detailed auditing report, in essence, specifies the errors in smart contracts and categorizes them based on severity levels. An audit report enables the developer to make critical changes to optimize the code’s performance.

Auditing not only aids in removing error-prone code but also in efficiently using time and resources. An audit also optimizes code for gas consumption.

Like every coin has a flip side, no matter how vital smart contract audits are, it has their own challenges. Following are the cons of smart contract code audit.

Is smart contract audit the future of blockchain security?

Although it acts as an additional layer of security, auditing smart contracts is not a guarantee that your project is hack-proof. Over 70% of crypto-heists have pricked the bugs in unaudited contracts, but few audited contracts have also been victims of security breaches.

A smart contract audit is necessary but not sufficient for blockchain security.

A smart contract is at its current nascent stage, and so are its vulnerabilities. New bugs will enter the space as the technology grows, making audit a necessary pre-requisite before smart contract mainnet deployment.

An industry that negates the construction of necessary defences will probably never reach its full potential. This is because it is almost impossible to rule out the possibility of bugs when talking about web3.0.

All that is required is auditing to evolve at the same pace with technological advancements or, ideally, a step ahead of it.

Blockchain security is of utmost importance. Lately, we have been dealing with a rising number of smart contract hacks keeping blockchain usage from reaching its full potential.

A smart contract audit is the first step to ensuring a secure blockchain network and should be neglected at any cost.

To Begin Your NFT Journey, Create a Fantastic NFT Marketplace

5 Life Tips to Help You Recover After a Car Accident