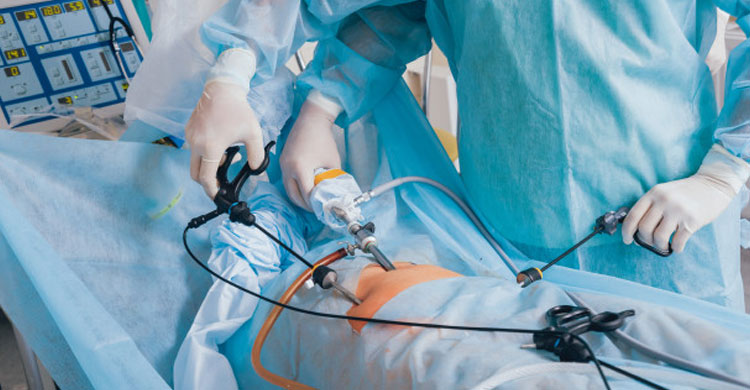 The recovery of the patient after a laparoscopic intervention is much faster. Operations that traditionally required large incisions, which could be more than ten centimeters, today can be performed with three or four tiny incisions. �Through these incisions we introduce small tubes, which we call trocars, and a camera to have vision. We fill the abdominal cavity with CO2 and with surgical instruments that enter through these trocars we perform the surgery�

As surgical wounds are smaller, their healing is also faster, thus considerably reducing the risk of infection during the postoperative period. In addition, its reduced size produces less aesthetic impact on the patient after surgery.

Urological operations with laparoscopic surgery were initially carried out by the surgeon with a 2D vision. In recent years, technological evolution has given new impetus to this technique that has allowed incorporating 3D vision during the operation. It has been possible to recover the depth plane that the surgeon only achieved with open surgery. “What 3D laparoscopy does is collect all the advantages of 2D laparoscopy by adding three-dimensional vision, so the level of precision that we achieve in each operation increases a lot”, says the urologist. Given that the technique is novel “in the city of Barcelona there are not so many surgeons currently doing 3D laparoscopy”, he remarks.

4. Laparoscopic surgery as the first option

Not all urological pathologies that require surgery can be done today by laparoscopy, “for example, large kidney tumors cannot be intervened in this way.” However, in some conditions this technique has become the first treatment option.

This is the case, highlights the specialist in laparoscopic surgery, of the removal of prostate tumors in localized phases; to treat kidney cancer , either with a radical nephrectomy – the surgeon removes the entire kidney – or a partial nephrectomy – only the part of the kidney that contains cancer is removed; the removal of some types of kidney stones ; or laparoscopic pyeloplasty. The latter is a technique of reconstruction of the urinary tract in the area of ??junction between the renal pelvis and the ureter, in cases of narrowing or blockage that prevents proper drainage of urine.

Laparoscopic surgery is a set of surgical procedures that are performed using small wounds as ports, usually smaller than 1 centimeter, in which trocars or devices are placed through which forceps adapted to surgical instruments and a high-definition camera are inserted., which allows to observe and manipulate the intra-abdominal organs. For this, it is also necessary to insufflate carbon dioxide into the abdominal cavity, in order to create a kind of dome that allows adequate visualization of the intra-abdominal organs, as well as the abdominal wall; and that, in turn, allows you to work comfortably.

It is very common to use laparoscopy to extract the cecal appendix due to acute appendicitis, extract the gallbladder due to inflammation or the presence of stones in it, perform surgeries at the level of the gastrointestinal tract such as intestinal, colonic, liver, pancreatic and splenic resections; as well as repair of both ventral, postsurgical and inguinal abdominal wall hernias.